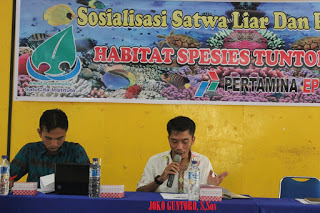 Socialization to Strengthen Community Groups to Protect Species and Habitat

Socialization and discussion to conserve Painted Terrapin (Batagur borneoensis) and habitat was held in Subdistrict Seruway on 21 October 2015. The socialization and discussion was held to strengthen the knowledge and planning of Satucita Foundation and two community group that established to protect the species. The discussion giving result that the upcoming nesting patrol, habitat rehabilitation will involve community group.

In the opening speech, Head of Subdisctrict Government of Seruway said that the conservation of this species must be supported and would like to thank to Satucita Foundation that facilitate and help locals to preserve this critically endangered species.

Meanwhile, the Head of BKSDA Langsa, Bambang Harsoyo, presented the regulation of protection on animals and plants. He also supports the Aceh Tamiang Local Government to issue a local regulation to protect this species in the district.

Joko Guntoro, program director of Painted Terrapin conservation, presented the status and distribution of this species and some scientific findings and the method to preserve wildlifes, included Painted Terrapin. In addition, the establishment of two community group was aimed to protect the species and habitat. Therefore, he aksed the commitment of the member of these groups for working together to save this species from extinction. The foundation will help and facilitate the locals to do that when the same time develop opportinities to empower villagers, such as a possibility to develop ecotourism.

conservation of freshwater turtles, wildlife and nature. View all posts by Satucita Foundation