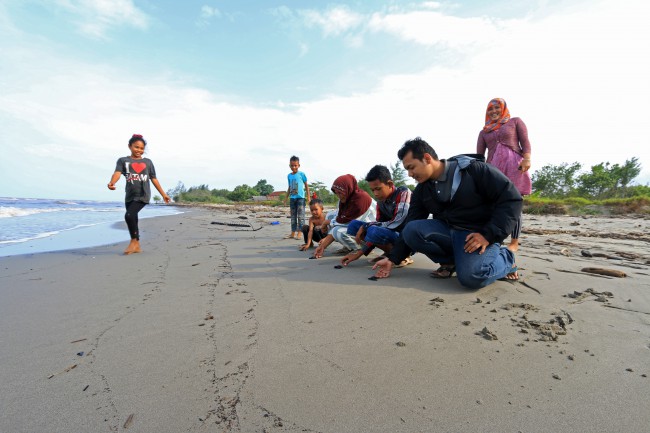 In the last three months, four sea turtles nests found on the beaches here, the same beaches to Painted terrapin (Batagur borneoensis) for laying eggs. Three nests had been harvested by fishermen before secured. Only one nest successfully secured by a fishermen who cooperated with us. So, we helped him to hatch the the eggs.After incubated for 58 days, totally only 21 hatchlings of Green turtle (Chelonia mydas) produced. The releasing are divided into two group. The first group released 17 hatchlings, was held on 4 February. The second group released 4 hatchlings that was held on 8 February. The hatchlings released by villagers and witnessed by our team and staff of BKSDA (Agency of Natural Resources Conservation) in Aceh Tamiang.

This is give the evidence that the beaches are also important for sea turtle conservation, not only for Painted terrapin (Batagur borneoensis). Even, as long as we recorded and have been confirmed by fishermen, may be this is the first releasing of sea turtle hatchlings in the last decade in this area. Formerly, the eggs found are always harvested by fishermen who found it.

conservation of freshwater turtles, wildlife and nature. View all posts by Satucita Foundation