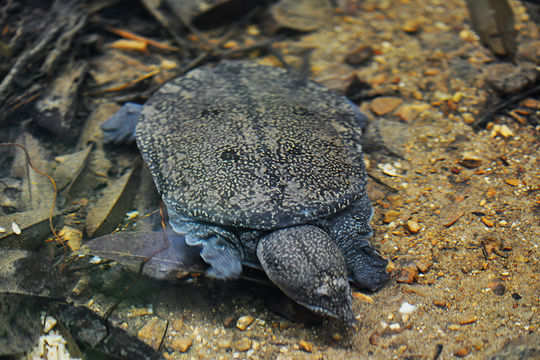 It’s head and neck are long, and the mouth is narrow and tubular. The head is dark with yellow spots and splotches. Shell is olive or brown to black with tan and yellow spots. Underside of shell is white or pale grey. A very large turtle with a broad flat shell. It’s shell has a soft, leathery appearance. The front edge of the shell has a series of bumps, which help to distinguish it from other softshell turtles in the region.

As like as sSoftshell turtles have a range of adaptations that give them a quite different appearance than other turtles. Their soft, flat shell is lighter and more streamlined so they can chase their prey through the water. The flat shell also allows them to bury easily in the mud. The long neck and narrow head can move quickly to grab prey in the water, as well as reach up to breathe while exposing none of the body. And the wide, flat feet act like paddles to propel them through the water.

This turtle has a large head that can give a painful bite, but will not do any real damage. This Asian Softshell Turtle is often caught for food and for traditional Chinese medicine. It is listed as “Vulnerable” by the IUCN Red List and is on CITES Appendix II.