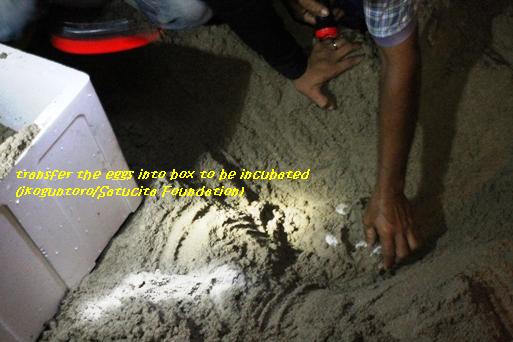 The small number of eggs were rescued are influenced by several factors. First, of the three main beaches where Painted terrapin nesting, the team is only able to keep an eye on the two beaches, there were Pusong Cium and Ujung Tamiang. As for another beach – Kuala Genting – is can not be monitored because of limited resources we have. In fact, we rely on and cooperate with fishermen to collect eggs on the beach. Fishermen have been taught how to move the eggs from the nest to the foam boxes.

The eggs that have been secured are still in hatching at our ex-situ facilities. Hatching is conducted by using a semi-natural method, using foam boxes. It is approximately that the eggs will begin to hatch on early of March. This estimation is based on the assumption that the fastest time of hatching is 72 days. However, it is also have evidence that some eggs are need 112 days to hatch.

We expect to save more eggs until March, although the peak season has passed. However, based on evidence from previous years, it is also found that Painted terrapin nesting on late February and early March. Based on the conditions, we expect to save up to 200 eggs. Assuming a hatching success rate is 60-70 percent, it will be 120-140 hatchlings released back into the habitat for this year.