Lembaga SatuCita was held a Foucussed Group Discussion to formulating material (contents) and methods to educating students about the importances to save Painted Terrapin (Batagur borneoensis) in the area. Representatives of students, teachers, university lecturer, officer of local government and law enforcement, leaders of local people and institution were involved in this meeting.

The aims of discussion that held in SMU Negeri 1 Seruway, on 23rd of June, were to review the draft of the guide book that will be used to educating the secondary and high school students in Seruway Sub-district about the importance of Painted Terrapin (Batagur borneoensis) in supporting mangrove ecosystem and how to save the species from the extinction in habitat. Seruway and Bendahara Sub-district are distribution area of this critically endangered species. “Both of these sub-district, predicted are as the last stronghold for this species in surrounding areas” stated Joko Guntoro, executive director of Lembaga SatuCita and also acting principal officer of Painted Terrapin Conservation Initiative (PTCI).

In that meeting, the participants also confirmed how the decreasing of the population of Batagur borneoensis. Datok Laksamana, a traditional institution leader for sea management in Aceh Tamiang District, said  “Until seven to ten years ago, people here were still could found the individu and the eggs easily. In the nesting season, fishermen always harvested the eggs for our consumption. The taste is delicious and people believe the eggs have high protein. Now, it is really difficult to collecting the eggs, even to see the individu it self is really difficult. That is why we agree with Lembaga Satucita that have trying to conserve this species in Seruway”.

Teachers and other stakeholders were enthusiastic in the meeting. The benefit of Batagur borneoensis conservation to people’s welfare, the history of B.borneoensis existence, the law enforcement to protect Seruway Forest Reserves were some of important issues in the meeting. These issues also expected to be priorities in the guide book and campaign that will be started in August 2011 by Lembaga SatuCita. The campaign it self will involving about 600 students in secondary and high schools in Seruway Sub-district.

Representatives of the students also expecting that when educating them about Painted Terrapin, the facilitator – Lembaga SatuCita – can show the live specimen to them. “Although our parents often tell the stories about Tuntong – local name of Painted Terrapin – and we also eating the eggs, many much of my friends included me, never know how is the Painted Terrapin. Even, we do not know how to make difference between Tuntong and another turtles. That is why we hope that Lembaga SatuCita can show to us the live specimen in the campaign”, Mujib, 16 years old student, said. To this, Joko Guntoro stated that it will be coordinated with BKSDA (Board of Natural Resources Conservation) Province Aceh due to that the permit is issued by BKSDA office. 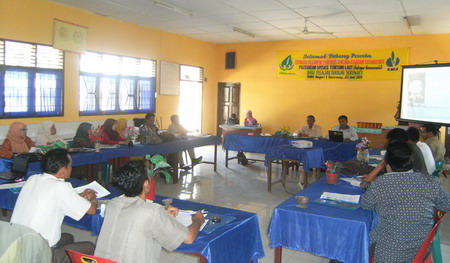 Many of participants also expecting that local government and other interested parties, particularly Lembaga Satucita, can establishing a sanctuary to support the conservation of Painted Terrapin. About this, Joko Guntoro and Yusriyono – secreatary of Lembaga SatuCita – explained that sanctuary will be playing a key role in the short term, but in the long term let the B.borneoensis survive in the habitat is a ultimate objective. Nevertheless, Lembaga SatuCita will trying to establishing a Research and Education Center for this species. Through this facility, expected local people will more aware to save this species. This meeting and campaign that will be launched in early of August 2011 is supported by Lembaga SatuCita and Keidanren Nature Conservation Fund (KNCF). (admin)